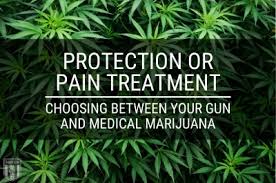 If you've ever filled out a Form 4473, you're familiar with the Question 11e: "Are you an unlawful user of, or addicted to, marijuana or any depressant, stimulant, narcotic drug, or other controlled substance?" In case you thought there was any ambiguity with regard to medical marijuana, you were wrong. Indeed, there is a warning in bold right underneath the question that clarifies:

"Warning: The use or possession of marijuana remains unlawful under Federal law regardless of whether it has been legalized or decriminalized or for medicinal or recreational purposes in the state where you reside."

Regardless of what one thinks about marijuana, its legalization or the right of the federal government to regulate either drugs or the internal laws of the various states, the fact remains: As of now, possession, sale and cultivation of marijuana remains a federal offense. It is a Schedule I drug in the same category as heroin and cocaine. You might not like that and you might think such classifications are ridiculous. The federal government doesn't care.

This is a particularly difficult issue for people who use medicinal marijuana for bona fide medical purposes, rather than as a sort of legal loophole to consume marijuana legally. Many people use medicinal marijuana for a variety of purposes including relief from pain, Alzheimer's symptoms, glaucoma, epilepsy and a number of complications related to cancer, including nausea and lack of appetite. The science on this is rather conclusive, so much so that Big Pharma makes legal synthetic THC pills known as marinol.

What Is the Law Regarding Guns and Marijuana?

In 2011, the Bureau of Alcohol, Tobacco and Firearms clarified its stance – it is not legal for anyone who uses any illegal substance to own firearms. This includes marijuana, which is legal according to some state laws, illegal according to others, and also illegal under federal law.