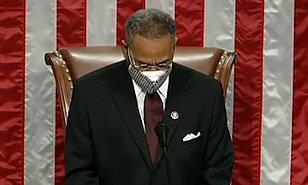 Democrat Representative Emanuel Cleaver has provoked fury by closing a congressional prayer with the words 'amen and a woman'.

The Missouri pastor was asked to deliver the prayer to open the 117th Congress on Sunday, and decided to make a gender neutral address.

But after the video was posted online, many pointed out to Cleaver that amen is Latin for 'so be it' and has no reference to gender.

Rep. Guy Reschenthaler said on Twitter: 'It's not a gendered word.

Cleaver also mentioned the Hindu god Brahma as he gave his prayer to Congress.

He said: 'We ask it in the name of the monotheistic God, Brahma, and "god" known by many names by many different faiths.'

'Dems find a way to make everything stupid and nonsensical. Utter clowns, all of them.'