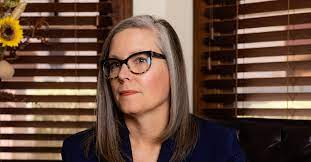 The measure, which was contained within a budget reconciliation bill (pdf), seeks to stop Hobbs, a Democrat, from playing a role in lawsuits related to state election rules while giving the attorney general's office "sole authority" to defend Arizona election laws. The bill now heads to the desk of Gov. Doug Ducey, who hasn't signaled opposition to it.

The bill's language regarding curtailing Hobbs's power is "necessary to ensure the faithful defense of the State's election integrity laws and to eliminate confusion created by the Secretary of State about who speaks for Arizona in court," Katie Conner, spokeswoman for Republican Attorney General Mark Brnovich, told the Arizona Mirror. His office also accused Hobbs of filing "politically motivated bar complaints against" his office's lawyers to "target their professional standing and reputation."

The version of the measure that passed on the night of June 24 says the "attorney general has sole authority in all election litigation to direct the defense of election laws, to appeal or petition any decision, and to intervene on behalf of this state at any stage" until Jan. 2, 2023, which is when Hobbs's term ends.

The bill would also bar the attorney general's office from providing legal advice or representing the secretary of state. Hobbs also can't use public funds to hire lawyers relating to election litigation, and additionally limits her to hiring one full-time legal adviser.