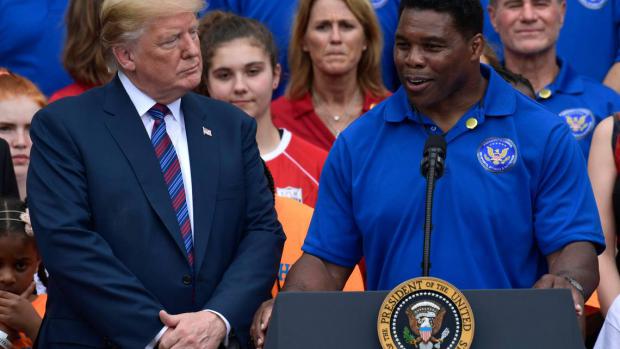 Former NFL running back and Trump favorite Herschel Walker has filed paperwork to run for Senate in Georgia challenging Sen. Raphael Warnock for a seat  he wrested from Republicans in one of their most high-profile losses of the last election cycle.

Walker, political newcomer, will take on Warnock, a pastor who also had no political experience, next year. Warnock won the seat in a runoff special election after taking on Republican Sen. Kelly Loeffler.

Walker, who played collegiately at the University of Georgia and led the Bulldogs to a national title, just registered to vote in the Peach State last week, making him an official resident. He'd been living in Dallas for the past decade.

Walker has not yet publicly announced his candidacy, but he filed his documents to the Federal Election Commission (FEC). A formal announcement is expected in the coming days.

The hotly contested 2020 Senate elections in Georgia ended in two GOP losses after a runoff election, and tossed the majority to Democrats in the upper chamber. Both Republicans had been narrowly ahead in November's vote, but there were multiple candidates on both sides, and under Georgia's unusual election laws if no candidate wins a majority the vote goes to a runoff with the top two vote-getters.

Georgia had not had a Democrat senator in 15 years until the 2020 election, and Republicans are likely to come back with a vengeance in the 2022 campaign.

Former President Trump has repeatedly urged Walker, who spoke at the 2020 Republican National Convention, to run for the seat.