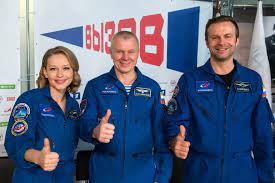 Shipenko and actress Yulia Peresild returned to Earth on Sunday after gathering more than 30 hours of material for "The Challenge", billed as the first space movie and hailed by Russian media as a world-beating achievement.

Asked about a possible moon sequel, Shipenko told a news conference: "We're ready. We believe space cinema should be filmed in space. If it's about the moon, let's go to the moon, if it's Mars, let's go to Mars.

"Why not? Why should cinema be filmed in a studio?"

Russian state media have provided breathless cover of the cosmic film venture, latching onto a rare feelgood story at a time when business titans Elon Musk and Jeff Bezos have been grabbing headlines with rocket launches and Russia's own space programme has suffered delays, accidents and corruption scandals.

"Every second was a big discovery," said Peresild, who plays a doctor who is asked to travel to the space station to save a cosmonaut's life.