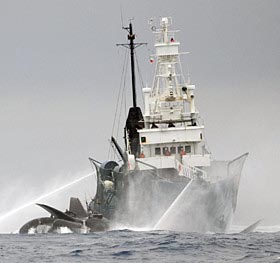 Japanese whalers shot water cannons at anti-whaling activists on Saturday, the conservationist group's founder claimed, hours after the activists tracked down the whaling fleet in the remote and icy seas off Antarctica.

The Sea Shepherd Conservation Society is chasing the fleet in the hopes of interrupting Japan's annual whale hunt, which kills up to 1,000 whales a year. The two sides have clashed violently in the past, including last year, when a Sea Shepherd boat was sunk after its bow was sheared off in a collision with a whaling ship.

On Saturday, Sea Shepherd founder Paul Watson was talking to The Associated Press by telephone from his ship when he said the whalers suddenly began blasting one of his group's inflatable boats with a water cannon.

"They just turned their cannons on our Zodiac," Watson told The AP. "Right at this moment."

New Zealand-based Glenn Inwood, spokesman for Japan's Tokyo-based Institute of Cetacean Research, which sponsors the whale hunt, said he had no comment.

Every year, Japan and Sea Shepherd make claims of aggression against each other, but the accounts are generally impossible to verify. Their skirmishes take place in an extremely remote part of the ocean off Antarctica.

The Japanese are allowed to harvest a quota of whales under a ruling by the International Whaling Commission, as long as the mammals are caught for research and not commercial purposes. Whale meat not used for study is sold for consumption in Japan, which critics say is the real reason for the hunts. Each hunting season runs from about December through February.

Japan's whaling fleet set out for Antarctic waters in December. Sea Shepherd has been searching for them since, and spotted the first whaling vessel on Friday, Watson said. By Saturday, the group had tracked down three of the fleet's ships in an area about 1,700 nautical miles (3,200 kilometers) southeast of New Zealand, he said.

"We got them before they started whaling and now that we're on them, we're hoping to make sure they don't kill any whales for this season," Watson said.

What Have We Done to the Whale?

Hybrid solar converter harvests both sunlight and heat at 85% efficiency

More than 350 elephants drop dead in mysterious mass 'die off' --