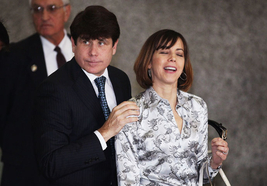 In a motion filed overnight, Blagojevich's attorneys say the calls would support the former governor's contention that he is innocent of charges alleging he attempted to sell Barack Obama's U.S. Senate seat after the November 2008 election.

While much of the motion is blacked out to comply with orders that the conversations remain under seal, it appears at least one of the alleged conversations was between then Chief of Staff John Harris and then congressman Rahm Emanuel, who had just taken the post as president-elect Obama's chief of staff.

"The missing call casts all of the other evidence in a different light," the lawyers write. "Moreover, the failure of the government to disclose this call, and the failure to reference this facto the jury or the Court should raise the suspicion of the Court."