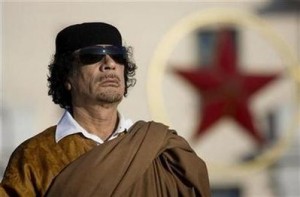 In a column posted on Time's website, Robert Baer said the sabotage would begin by blowing up pipelines to the Mediterranean. However he added that the same source had also told him two weeks ago that unrest in neighboring countries would never spread to Libya -- an assertion that has turned out to be wrong.

"Among other things, Gaddafi has ordered security services to start sabotaging oil facilities," Baer wrote. "The sabotage, according to the insider, is meant to serve as a message to Libya's rebellious tribes: It's either me or chaos."