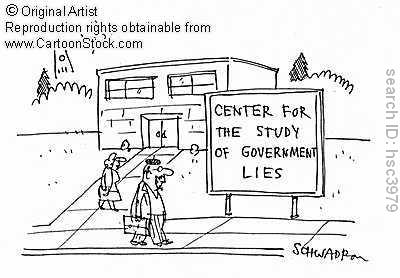 Lyndon Johnson told America that the North Vietnamese had attacked us in the Gulf of Tonkin. He lied. As a result, tens of thousands of Americans and millions of Vietnamese lost their lives in a no-win war.

Bill Clinton told America that he "did not have sexual relations with that woman." Tens of thousands of children who (a generation ago) would have dreamed of being President have now turned to experimenting with oral sex.

"Read my lips: no new taxes." "I experimented with marijuana a time or two and I didn’t like it, and didn’t inhale and never tried it again." "The federal building in Oklahoma City was destroyed by right-wing extremists" (why has the Arab-looking "John Doe #2" never been arrested?) "Vince Foster committed suicide." "Children are being molested in a compound in Waco" (to protect them, we must incinerate them). The downing of TWA Flight 800 was an "accident." (and again, the Mideast questions have been suppressed). "We owe it to ourselves." It is "easy to imagine an infinite number of situations . . . where government officials might quite legitimately have reasons to give false information out" (details). "Saddam Hussein is a direct and imminent threat to the United States of America."

Behind all these lies -- all the buildings destroyed by terrorists, all the lives lost in senseless wars, all the new taxes taken from your paycheck, and all the decline in America's greatness -- is The Biggest Government Lie of All Time.