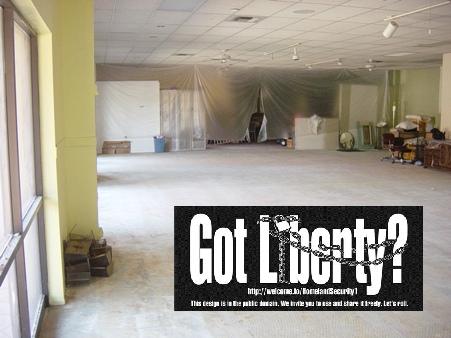 “Got Liberty?” ACTIVISTS HEADQUARTERS
Ready to serve the freedom activists from Arizona (for a very limited time)
Sometimes activists need a place to work,… simple as that.
(Please contact me directly at ernesthancock@cox.net
PLEASE contribute to this important project HERE)
Central Phoenix businesses are being destroyed due to Light Rail construction. Business space is vacant up and down the Central Corridor and else where along the route. This provides us an opportunity.

The Western Libertarian Alliance is me,... and other individuals that are nothing more than friends getting together to have fun and exercise their free speech in making a point whenever it suits the individuals willing to participate. No committees, no scheduled meetings, no titles or shiny badges. Experience has taught us that one of the most important factors in political activism is timing. Direct communication with people is the most effective method of sharing concepts and when the time is right you can have

a great impact on what is discussed in the political debates of the day and you can even have a hand in moving the debate outside of the ever shrinking envelope of political discourse.
I feel very strongly about the next 3 weeks and am motivated to do something about it. I have shared my thoughts with close friends that share my goals. Our combined individual efforts in support of a single objective, for a limited time, means that we remain focused and have always been successful. This project requires a large open space for about a month. 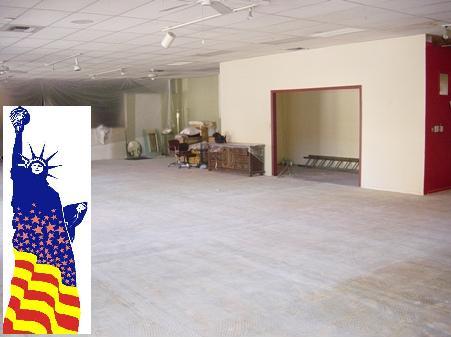 This North Central address has allowed us about 2500 square feet of totally open area to accomplish many things. By Wednesday March 14th we will have the location ready to begin volunteer work. Between now and then several of us are constructing simple work stations. The 8 week lease has been signed and the power is turned on.
I share this with you all now because, in addition to asking for your help with money, material and labor, 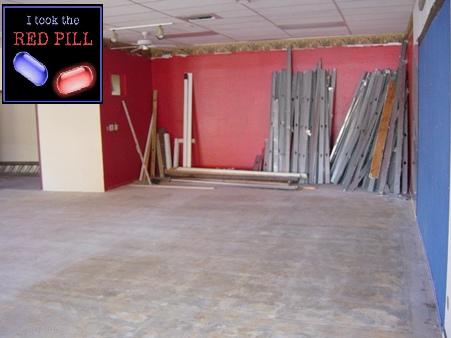 I am making the space available to all that need a space to work on simple projects in an effort to express themselves to the general population. As long as your project is peaceful and does not involve the destruction of property, I wish to make the space available. Since we will be producing signs, posters and billboard size banners (why we needed the space) others with similar projects are welcome to share (however I reserve the right as the lessee to refuse entry to anyone for any reason, or no reason.
I have already made contact with Anti-War, 911 Truth, Libertarian, Republican Constitutionalist, Democratic Election Integrity and Civil Rights activists that are planning to make use of the space while it is available and I can schedule time for them. I begin talk radio interviews on the subject Tuesday the 13th and Tuesday morning I will have more details here on FreedomsPhoenix.
Open Source Technology for Urban Communications

From past experience I know that “the bad guys” would rather that the coming cooperation of activists from several different perspectives never get started in the first place. But they don’t know what many of us knew was going to happen years ago. FreedomsPhoenix has proven to many just how overlapping our interests really are.
Remain the judge of your own actions. Never surrender that position by default. When the enemy screams “Foul!” the loudest, you know you’re doing him the most damage. Those who help him scream are also the enemy. - LNSmith
http://www.ernesthancock.com/html/articles.html
My Project:
I claim the right, guaranteed by the 1st Amendment to the United States Constitution and the Arizona State Constitution to share my thoughts and express my views with whomever I want with no limits or restrictions as long as I do not violate the rights of another individual (now let’s see how that plays out when going up against the Big Bad Guys :)
It is my intention to produce as many large signs and banners as I can gather the resources for in support of Liberty.

Many of them will be focused on encouraging Americans to research the positions clearly taken by Congressman Ron Paul. I will not have any coordination with the Ron Paul organization since I am unwilling to be tethered or have my actions inhibited by unconstitutional laws to limit what I can and can not say.
Ron Paul seeks the Republican nomination for President of the United States and I am a non voting libertarian freedom activist. However, I am not the only one in agreement with Ron Paul’s positions on the Federal Reserve, The IRS, Foreign Policy, Economic Policy, War, Individual Liberty & Self-Responsibility, Civil Rights, Decentralization, the proper role of government and many other issues.

And I am firmly of the opinion that we have a limited time left to us to make a difference before the vast majority of Americans will be economically forced to choose a life totally directed by a central authority,… or to not. I see the Ron Paul campaign as the best opportunity to educate an entire generation about the great problems we face and to point out that Freedom’s the Answer.
An “endorsement” of Ron Paul by me, or anyone I know, is of little use or detriment to Ron Paul or what he stands for. But the efforts of me and others are certain to have an impact and I can not allow 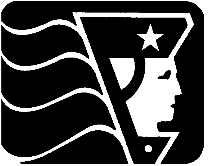 this great opportunity to pass without having done what I could to avoid what I fear is in store for us all without a wholesale abandonment of our dependency on government to run our lives. Besides, we always have fun, and the investment of time and money is much more effective than yelling at the various media for not sharing the truth when we can easily bypass them entirely.
For updated information on Ron Paul’s schedule…
the unofficial
Ron Paul for President blog
http://ronpaul.rescue-us.org/
The “Official Ron Paul Exploratory Campaign”
http://www.ronpaulexplore.com/
FreedomsPhoenix’ coverage of the POTUS race for 2008
http://freedomsphoenix.com/Standard-Page.htm?Page=00114 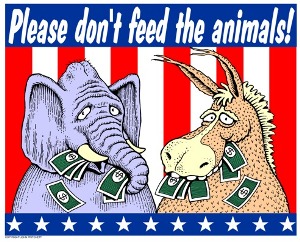 Republican Campaigns
Democratic Campaigns
(Others as they become interesting)
The last I heard, Ron Paul is coming to Arizona on the evening of Thursday March 29th where I hope to greet him with signs and banners and as many people as are interested in showing support for the issues important to them.

The next 2 days will be full of media appearances and gatherings. I hope to encourage the production and display of slogans and support for issues, championed by Ron Paul, all over the Valley in various and creative ways. But to accomplish this we need to produce the material cheaply and have supporters willing to make certain they are seen.
April 4th 2007, Ron Paul will be part of the New Hampshire presidential debates aired on CNN and moderated by Wolf Blitzer. Arizona's efforts and their timing is very important this early in the process and I will take advantage of it. I will put forth this small effort in an attept to avoid what is in store for this country without a drastic change in direction.
(I've just been informed that the New Hampshire debate has been moved to the first week in June,... and Guliani and McCain will not be participating in the Ron Paul ass whipp'n,... shocking :)
“Once begun,… Half  done”

It is the networking of individual activists from several perspectives and interests working together to support a general message of peace and liberty that is the greatest threat. Don’t think so?... Witness!

3 Comments in Response to “Got Liberty?” ACTIVISTS HEADQUARTERS

I love what you've done with the place Ernie ;-)

MOST SWEEPING GUN BAN EVER PROPOSED

On Feb. 14th, 2007, Rep. Carolyn McCarthy, a New York Democrat, introduced H.R. 1022 in the U.S. Congress. This new bill proposes going further than the Clinton gun ban on semi-autos, and will outlaw many common guns, especially those with clips holding more than 10 rounds! All semi-auto shotguns would be prohibited. The Ruger 10/22 rifle would be banned, with many others that have "any characteristic that can function as a grip"! Essentially, only guns of minimal capacity deemed to be "sporting" guns would be permited. Get on the horn and shoot this ugly buzzard down!

This is a wonderful idea. Let's hope libertarians in every city do the same whether it be a swank office or a large shed. Spaces like this promote community and inspire activists to keep moving forward.

Gabby Petito: Tip of the Iceberg of Violence Against Women in America

Why Do We Owe Anything to Afghanistan--We Just Spent $6 Trillion On Them!

An Interview With Reality of Our Country's Present Mess