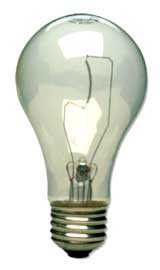 Remember how Charlie Brown always fell for it when Lucy held the football? The “Oh Noooooo! You can't fall for that AGAIN!” moment occurred to me again this morning when I saw the Joseph Farah article about light bulbs. Of course, Farah is the one who makes money writing this kind of drivel.

It is simply amazing when one person can be wrong twice in the same article, especially having noted that the problem is, in his own words “command-and-control fascism.” Of course there is. So why does he continue to fall for it?

If there is a fascist agenda it behooves him to think the implications through, instead of launching into blather that so well serves those same CorporaState types, addicted multigenerationally to getting their greedy hands on our money.

Farah opines in his online ezine, “All of these innovations by government have one thing in common – as do all the other provisions of this hopelessly misguided piece of legislation. They are the result of panic sweeping over elected officials because of a mythical belief in man-made, catastrophic global warming – an idea totally unsupported, in fact, contradicted, by all good and sound science.”

Misguided? Actually, right on target. Panicked? Only if those elected types miss the gravy train. The CorporaState is getting what they paid such as Bush, Senior, Maurice Strong, Robert O. Anderson, and Ed Crane to deliver. What was delivered was false dichotomies. You know, if not this, that, when neither is true. Sounds science never enters into it. The cycle of warming and cooling to which Earth reacts is irrelevant. The pollution caused by corporate greed impacts us in more significant ways.

If you think the conflicts that now exist between groups, gay, straight, women, men, races, and on issues like the environment happened because of real issues then I have a bridge you should buy.

All such conflicts serve to distract us into fighting among ourselves when the issue is our God-given rights, not how government chops us up for corporate profit.

None of these is anything but clever manipulation. Since Farah used the issue of global warming, also known as the environment, I'll use that to make the point.

The environment is not now and never was a partisan issue. Those light bulbs we will not be able to use simply force us to enrich yet another corporation; none of those legislators pushing these laws think for a moment that this is anything but a way to squeeze a little more money out of us. They also listen to the noise level generated by the corporations; think tanks are cheap, in corporate terms, an outlay of funds that pays big dividends. The yammering types who are paid through various think tanks and organizations are made up of sincerely deluded and credulous individuals who can't think controlled by those whose 401Ks depend on making sure they don't.

The whole idea of carbon credits and the other controls asserted through the cover of environmentalism, even selling our water along with the right to pollute our air, was on the agenda very early on. They just needed time to get the pieces in place and train Gore.

Follow the money. This is not stupidity or oversight but the outcome of careful, long term planning, the kind corporations have been doing for generations.

In 1970 we all agreed we wanted clean air and water. Those speaking for 'environmentalism' today do so because, with professional foresight, those working for Big Oil and other related Grid Corporations saw how useful it would be to control the environmental movement. So they stole Earth Day. Earth Day, in case you are still living in delusion land, is in March on the Spring Equinox. Those who originated it continue to work for Peace, Justice and Care of the Earth; the corporatypes keep trying to get control of it but, so far, have failed on that one. That is the Earth Society, a group of now mostly elderly activists who were sincere and too trusting. The real organization has fended off many attempts, including this one they are now fighting that, not surprisingly enough, receive support from major corporations. Something you should understand since it will happen to you, too when they decide you are useful.

The event you celebrate in April is Oil Day. Is the light on yet?

The miracle will be when the light goes on for Farah.

1 Comments in Response to Will the Light go on for Joseph Farah?

The corporate planning I'm sure is behind this feel-good ban on incandescent light bulbs. The fat cats will force the sale of billions of new fluorescent lights and put off investing in new power plants with this ban...not that I expect any thought was given to the public.
Fluorescent lights cause seizures in some folks, and annoy others. Visually impaired people often need a brighter light...say a 300 watt bulb...for which no fluorescent substitute exists. Some people prefer the yellow glow of incandescent bulbs over stark white fluorescent lights. What about specialized lights, like stadium lights and those in medical equipment? What about the decorative lights...flickering chandelier lights, Christmas lights, mood lights and such?
I believe Pillsbury-Foster is correct about big business planning this, but from my standpoint, it is thoughtless feel-good legislation giving no regards to the needs of the people. And no, I don't believe any savings will be passed on to the customers. That's the bottom line!