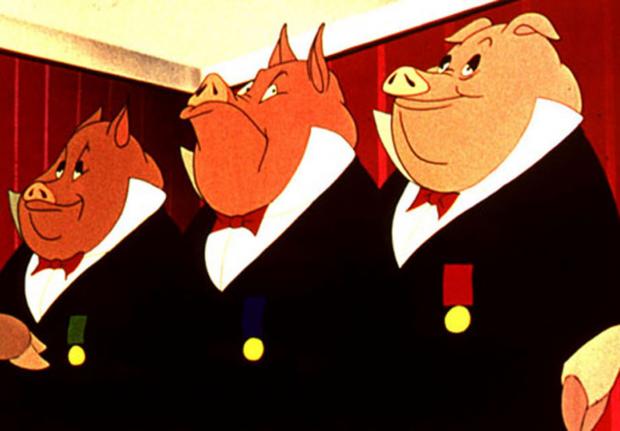 Some Animals Are More Equal Than Others
(Publisher: The Left The Left The Left... and the difference is what? Michelle Malkin is not the one to be calling the Kettle Black. But this piece of news is very interesting :)

The far Left Center for American Progress has its tentacles everywhere.

I noted in my column on the Internet Snitch Brigade this morning that former CAP operatives have been installed at HHS and work closely with the health care czar.

At Newsbusters, Seton Motley reports on the new FCC “Diversity Officer” — a racial engineering czar who has been targeting conservative talk radio since his days working for CAP.

But Doctor of Jurisprudence Lloyd is far more than merely a communications attorney. He was at one time a Senior Fellow at the uber-liberal Center for American Progress (CAP), for whom he co-wrote a June 2007 report entitled “The Structural Imbalance of Political Talk Radio.”

Which rails against the fact that the American people overwhelmingly prefer to listen to conservative (and Christian) talk radio rather than the liberal alternative, and suggests ways the federal government can remedy this free-market created “problem.”

These last two get perilously close to the use of “localism” to silence conservative (and Christian) radio stations, about which we have been warning for quite some time.

Blah Blah Blah...
Bottom line is that the FCC was suppose to have no 'jurisdiction' over "The Public Interest" (which is whatever the 'government' wants it to be).
They are to make sure that frequencies of one radio station doesn't interfere with another's. And I think that originally was only if it crossed a state line.
But once you start getting government involved...

1 Comments in Response to Meet the FCC Diversity Czar

Oh, I'm sorry Mr. Hancock.  We have determined there is just not enough diversity on your radio show. Here is our list of approved speakers for the next month.  As you can see, you have a wide variety of topics and commentors to choose from such as Maya Angelou, White House Chief of Staff Rahm Emanuel and Nobel Prize winning economist Paul Krugman.