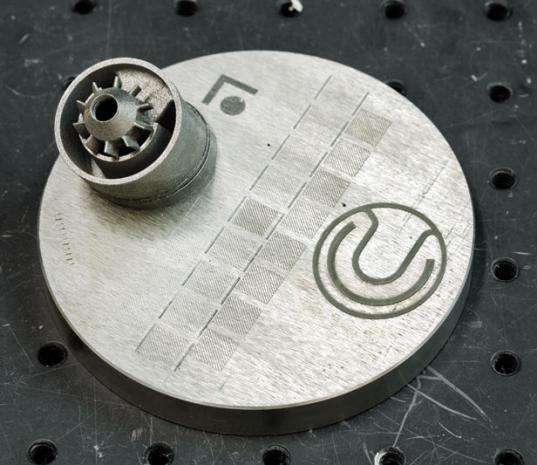 The parts in jet engines have to withstand staggering forces and temperatures, and they have to be as light as possible to save on fuel. That means it's complex and costly to make them: technicians at General Electric weld together as many as 20 separate pieces of metal to achieve a shape that efficiently mixes fuel and air in a fuel injector. But for a new engine coming out next year, GE thinks it has a better way to make fuel injectors: by printing them.

To do it, a laser traces out the shape of the injector's cross-section on a bed of cobalt-chrome powder, fusing the powder into solid form to build up the injector one ultrathin layer at a time. This promises to be less expensive than traditional manufacturing methods, and it should lead to a lighter part—which is to say a better one. The first parts will go into jet engines, says Prabhjot Singh, who runs a lab at GE that focuses on improving and applying this and similar 3-D printing processes. But, he adds, "there's not a day we don't hear from one of the other divisions at GE interested in using this technology."

These innovations are at the forefront of a radical change in manufacturing technology that is especially appealing in advanced applications like aerospace and cars. The 3-D printing techniques won't just make it more efficient to produce existing parts. They will also make it possible to produce things that weren't even conceivable before—like parts with complex, scooped-out shapes that minimize weight without sacrificing strength. Unlike machining processes, which can leave up to 90 percent of the material on the floor, 3-D printing leaves virtually no waste—a huge consideration with expensive metals such as titanium. The technology could also reduce the need to store parts in inventory, because it's just as easy to print another part—or an improved version of it—10 years after the first one was made. An automobile manufacturer receiving reports of a failure in a seat belt mechanism could have a reconfigured version on its way to dealers within days.

Is this how StarTreck's Duplicator worked ?

Portable X-ray device would let patients check their own bones