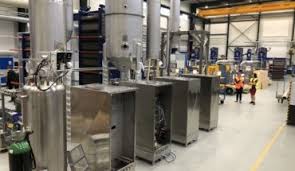 Aslak Stubsgaard, CTO of Copenhagen Atomics provided an update to Nextbigfuture on their development of a Molten Salt nuclear fission reactor. They are a molten salt reactor company developing a 100MW(th) thorium molten salt reactors with an initial load plutonium from spent fuel. The reactors are designed to be roughly the size of a 40-foot shipping container and can be produced on an assembly line at low cost and scalable.

The goal is a walkaway safe reactor that is mass produced in a shipping container form factor.

They have chosen to validate a paper design through regulator pre-approval stages without building anything.

In 2019, they received two major danish grants. Copenhagen Atomics partnered with Alfa Laval who are one of the world's leading heat exchanger producers and moved a majority of their lab facilities to Alfa Laval's site in Copenhagen.

They are building pumped molten salt reactor loops, capable of pumping 700C fluoride/chloride salt. Copenhagen Atomics will soon open up for a public investment round.

Above, you see the molten salt loops currently under construction, in Alfa Laval's production facility.