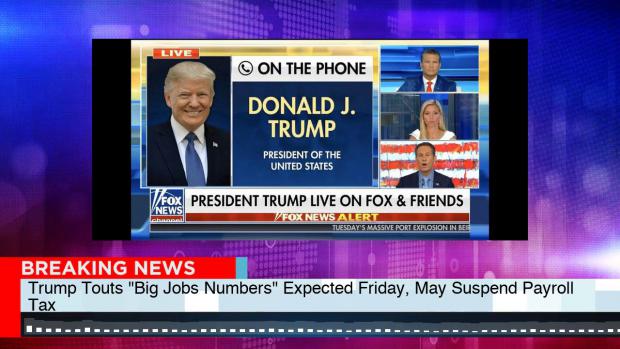 President Trump told Fox News, in an interview on Wednesday morning, there will be "another big jobs number on Friday," and reiterated his view the US economy is marching towards a V-shaped recovery.

President Trump said he might suspend the payroll tax to supercharge the economy ahead of the election, as Republicans faced strong opposition in Congress in discussions on the next stimulus bill.

He reiterated the country is in good financial health (despite Fitch revising its US' outlook to negative last week) and ready to "rock and roll." He said the Democrats are holding things back and don't want to open schools.

The president inaccurately said children are "almost immune" to COVID-19. When it comes to immunity among teachers, he said that "is a different story." He suggested older teachers shouldn't return to work until after the pandemic passes.

President Trump continued to reiterate the virus is a "terrible thing that China sent us."