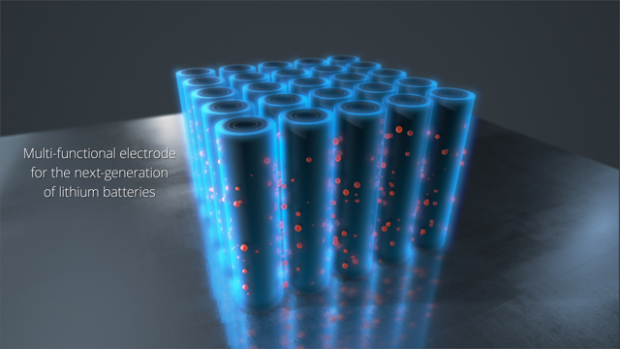 Nawa is already known for its work in the ultracapacitor market, and the company has announced that the same high-tech electrodes it uses on those ultracapacitors can be adapted for current-gen lithium-ion batteries, among others, to realize some tremendous, game-changing benefits.

It all comes down to how the active material is held in the electrode, and the route the ions in that material have to take to deliver their charge. Today's typical activated carbon electrode is made with a mix of powders, additives and binders. Where carbon nanotubes are used, they're typically stuck on in a jumbled, "tangled spaghetti" fashion. This gives the charge-carrying ions a random, chaotic and frequently blocked path to traverse on their way to the current collector under load.

Nawa's vertically aligned carbon nanotubes, on the other hand, create an anode or cathode structure more like a hairbrush, with a hundred billion straight, highly conductive nanotubes poking up out of every square centimeter. Each of these tiny, securely rooted poles is then coated with active material, be it lithium-ion or something else.

The result is a drastic reduction in the mean free path of the ions – the distance the charge needs to travel to get in or out of the battery – since every blob of lithium is more or less directly attached to a nanotube, which acts as a straight-line highway and part of the current collector. "The distance the ion needs to move is just a few nanometers through the lithium material," Nawa Founder and CTO Pascal Boulanger tells us, "instead of micrometers with a plain electrode."