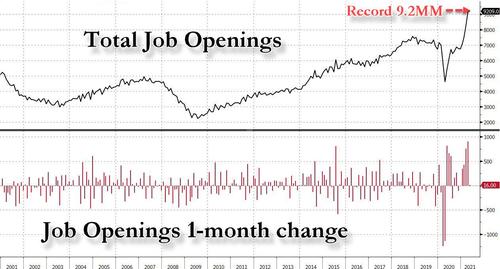 In previewing today's JOLTS data, Bloomberg writes that it "is likely to matter more for investors than FOMC minutes later today" as the last three prints have led to a pop in stocks after the first five minutes, with tech underperforming alongside a rise in yields and the dollar. The exception is the last print, which boosted stocks but did not translate to the bond market. As a reminder, the last reading shocked to the upside with job openings hitting a fresh record of 9.3 million, illustrating that enhanced unemployment benefits have indeed depressed employment.

As Bloomberg adds, depending on today's number, "either last month's print can be dismissed as a one-off or we will get further evidence of a problem that could hinder the next steps of recovery. There are two possible readings. The first is that unfilled job openings mean the Fed can keep deferring taper talk, which would be risk-positive. However, if the labor market faces a disconnect between hirers and workers, that could be inflationary."

With that in mind, moments ago the DOL reported that in May (which as a reminder is extra delayed since JOLTS is one month behind the jobs report) we got more of the same, with job opening hitting a record 9.209MM, slightly below the expected 9.325MM. But how is this a record since last month the number was 9.286MM? Simple: the DOL revised the April print lower to 9.193MM, making the May print the highest on record. That said, unlike last month's record surge which saw 905K new job openings added, in May job openings rose my a much more modest 16K.