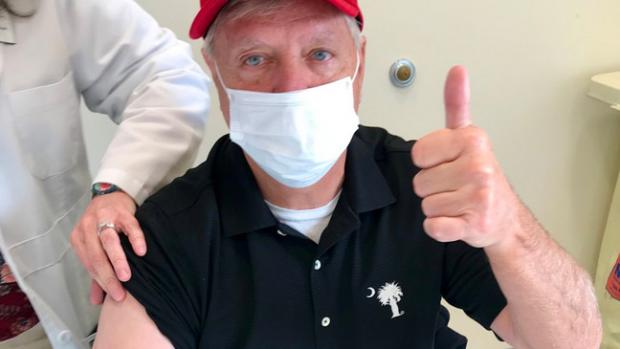 Speaking at a county Republican event in Summerville, South Carolina, Graham said he had received the vaccine and encouraged audience members to take the vaccine as well.

"If you haven't had the vaccine you ought to think about getting it because if you're my age—" Graham said, before he was interrupted by boos and shouts of "No!" from the audience.

"I didn't tell you to get it, you ought to think about it," Graham continued, shrugging to the audience as they heckled him.

Graham cited statistics showing that the vast majority of coronavirus hospital patients in South Carolina are unvaccinated, only angering the audience more.

"Well, I'm glad I got it. Ninety-two percent of people in hospitals in South Carolina are unvaccinated," before he was drowned out by shouts of "false!" and "not true!"

Graham said he opposed mandating the vaccine for members of military and health-care workers, but even that wouldn't win over the audience of several dozen Republicans.

After a man who identified himself as a civilian employee of the Navy told Graham he would soon lose his job to the military's vaccine mandate, Graham asked the audience if they had been vaccinated for measles.

"How many of you have taken measles shots?" Graham asked, prompting another series of boos and cries of "it's not the same!"

Graham isn't the first Republican to face pressure from the Republican base over vaccines. In August, Donald Trump was booed at an Alabama rally after he encouraged his supporters to take the vaccine.