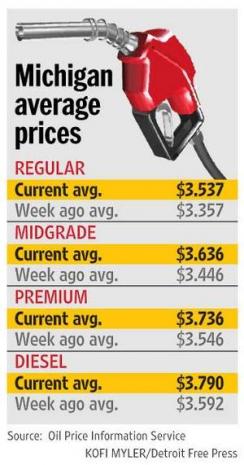 It won’t be long before we’re paying $4 a gallon for regular unleaded gasoline, at least if prices keep going up at their current pace.


Prices have already surged 38 cents a gallon in metro Detroit since President’s Day and likely will jump again by early next week as crude oil prices shot up nearly $3 Friday to $104.63 a barrel.

While Californians are already paying $4 a gallon for premium, unleaded regular reached an average of $3.53 for metro Detroit on Friday, according to AAA’s Daily Fuel Gauge Report. That reflected a range from $3.29 at a BP outlet at Jefferson Avenue and Masonic in St. Clair Shores to $3.79 at the Metro Airport BP at Middlebelt and Wick Road in Romulus.