Join-Us | Log-In
Freedom Forum | Translate
In 1989 I was exposed to a great deal of high level corruption (White House Daddy Bush New World Order stuff,... long story). I traveled to Washington, met with US Senators, Congressmen, Arizona Governors and State Legislators etc. seeking an answer to a simple question about the difficulty my father's company was having in exporting his product over seas. The thread I continued to pull unraveled the tapestry that was hiding the truth of where this country was heading.
I was lucky enough (or unlucky, depends on your perspective) to understand what was happening and why (Bad Guys being bad). This sent my wife and I on a lifetime mission to expose the truth at the root.
The first goal was to get 'standing' to file a lawsuit to expose many of the methods used to insulate those in power from the people. This is the reasoning behind my 1990 campaign for State Office. Everything else mushroomed from that.
From every part of the political spectrum I am known and understood to be very open about my goals and methods. I will express myself and help others do the same without a desire to control others or to "Build a Coalition". This is why FreedomsPhoenix is so open and diversified.
Today I did the best that I could to express my philosophical/political preference to those that are the face of the process that is charged with my doing so. But I do not trust the corrupt electoral system here in Arizona (which is why I run for political offices that have the ability to fix it but still do not vote).
So I shared my thoughts with the government today at the local level.
I know that my vote counted this time,... I COUNTED IT! 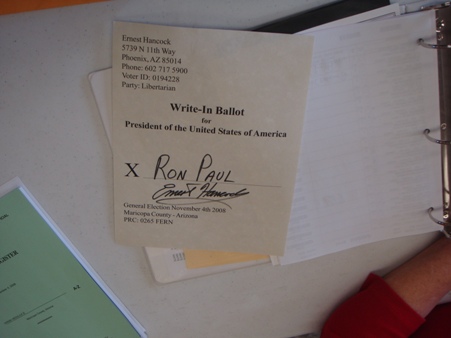 I walked in, laid it on the table, took this photo and left.
I KNOW my vote counted,... did yours?

Profession:
Publisher – www.FreedomsPhoenix.com
co-Founder – FreedomSummit.com
Campaign Address (Home)
5739 North 11th Way
Phoenix, AZ  85014
Phone: 602-717-5900
Fax: 602-264-5111
I started this effort a long time ago knowing what I was up against. This 1990 election gave me the standing I needed to argue over 44 elections laws all the way to the 9th circuit. The result was eliminating many of the unconstitutional election laws that prevented outside competition.
My 1994 Secretary of State race and many of my efforts since, has focused around computer election fraud,… where’s the proof? They passed laws preventing any manual validation of the computer program after the election. Now they want to get rid of the paper all together. Makes you go Hummmmm, don’t it?
(In 2006 during my Sec of State race I filed a Special Action in the Arizona Supreme Court to force compliance with a new manual validation law that we escorted through the process. The election of 2008 will be the first real test of this effort and will tell us a great deal)

1 Comments in Response to I Made Certain My Vote Counted... I counted it myself

You know Ernie, you ask a difficult and embarrasing question in my specific situation - will my vote 'count' or 'be counted'?
I am one of the 'Official Observers' in this election representing the Libertarian Party. I participated in the 'Logic and Accuracy' test last Tuesday (which FAILED the first attempt!), and I have a full written authorization to go and observe EVERYTHING associated with this election in any form or manner - the polling places, the 'collection centers' for the poll Ballot Reader Data Cartridges, and the Maricopa County Ballot Tabulation Center. I intend to vote in my precinct at my regular polling place at the end of the night, and accompany those individuals (supposed to be more than one - of different Parties) to the Collection Center, and then follow that Data Cartridge to it's final destination, and then go to the Tabulation Center to observe whatever will happen there. IN SPITE OF ALL THIS, at the end of the night when I go home, I will STILL not know for sure if my vote has been truly and accurately counted!

(But my ASS will have more than enough smoke in it to cover a second assault on Normandy.....)

Trudeau rolled the dice on a snap election. Canadian voters will decide whether his gamble...