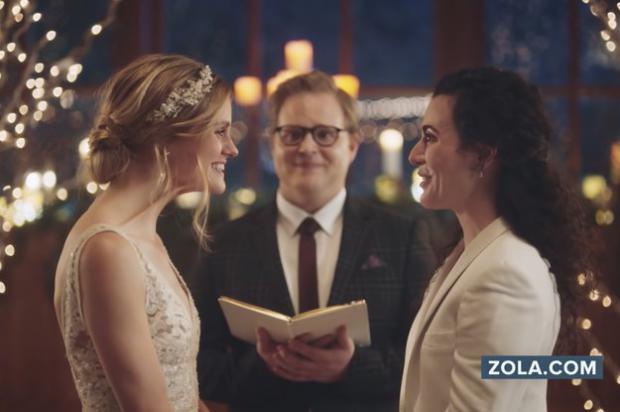 The Hallmark Channel has pulled ads featuring a lesbian coupe kissing at the altar on their wedding day after pressure from a conservative group.

The Zola wedding registry company commercial, which features two women getting married to each other, showed the sweet moment the brides shared a kiss after saying their 'I do's' in front of their family and friends.

But Christian-right One Million Moms group claimed the commercial was not 'family friendly' and condemned the channel for featuring the 'sinful lifestyle' in its advertising. The group even started a petition and threatened a boycott unless Hallmark pulled the ads.

Now Hallmark's parent company, Crown Media, appears to have has sided with the right-wing group.

A Crown Media representative explained to Zola it had pulled the commercials because it did not accept ads 'that are deemed controversial' and that the women's 'public displays of affection' went against their policies, according to emails, obtained by the New York Times.

Hallmark only pulled four of Zola's six commercials - the other two feature a bride and groom kiss at the altar.

Crown Media declined to comment on why the similar ad, featuring a heterosexual couple, had been approved.

'The debate surrounding these commercials on all sides was distracting from the purpose of our network, which is to provide entertainment value,' Crown Media said in a statement on Friday.

Zola said it no longer plans on advertising with Hallmark.