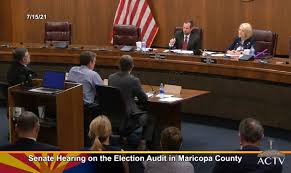 An alternate stream has been embedded below.

The Arizona Senate is holding a public briefing with leaders of the ongoing election audit authorized by Senate President Karen Fann.

It's an update and briefing not the appropriate time for any testifying https://t.co/B88ITYCIrT

Fann is joined by Senate Judiciary Committee Chairman Warren Peterson, along with Senate audit liaison Ken Bennett and the leaders of two of the vendors hired to conduct the audit, Cyber Ninjas CEO Doug Logan and CyFIR founder Ben Cotton, according to KTAR.

Cyber Ninjas was hired as lead contractor for the audit, which started April 23 after the Senate won a legal battle with Maricopa County for access to election equipment and approximately 2.1 million ballots from the November 2020 general election in metro Phoenix.

Fann told KTAR News 92.3 FM's The Mike Broomhead Show on Tuesday that the number ballots tallied during the audit didn't match the total documented by Maricopa County, but she didn't know how far off the counts were.