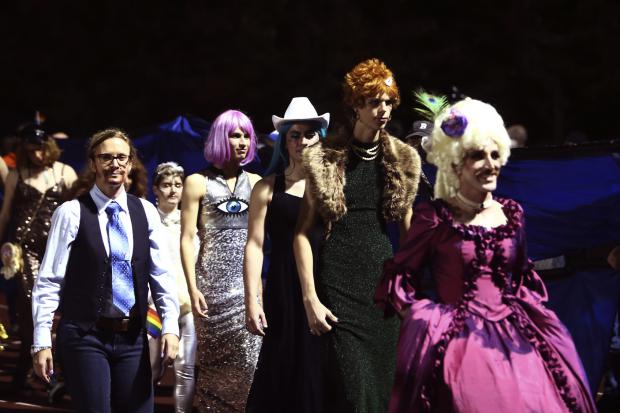 A Vermont high school homecoming football game turned into a 'drag ball' runway at halftime, with a mix of students and faculty members parading in gowns, wigs, and makeup — and a big crowd in rainbow colors cheering them on.

As school cheerleaders wrapped up their routine, about 30 students and faculty members dressed as drag queens and kings — or a bit of both — walked out onto the field and the crowd started to chant, 'Drag Ball!'

According to Seven Days, the show began with the 30 or so performers hidden behind blue fabric, which dropped as techno music blared out.

Students and teachers alike dressed up in over-the-top costumes, with dresses, jewelry, hair, and makeup.

'We got kings, we got queens, we got in-betweens,' an announcer's said. 'We need you to give it up for all these performers.'

Spectators in the crowd — who had been encouraged to wear rainbow clothing and showed up in colorful tutus, boas, T-shirts, and even body paint — cheered them on.

'The stands were completely packed,' he told the Associated Press. 'It was just so heartwarming to see.'

Andrew LeValley, an English teacher and alliance adviser at the school, came up with the idea.